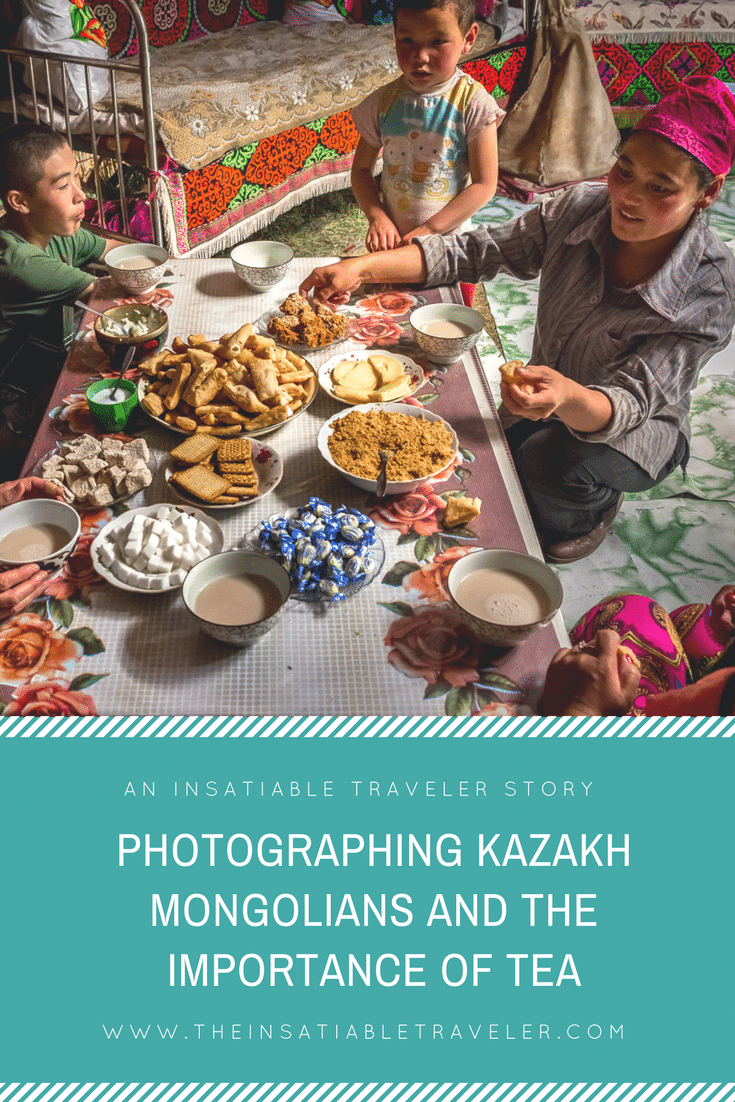 We sit on the ground around a low wooden table waiting for the day to begin. It’s overcast, threatening rain, and the ger is dim, throwing everything into monochrome. A pot of boiling milk sits on top of a battered wood-burning stove in the center of the room, and I watch as steam rises into the air in thick white wisps.

I’m in the middle of a two-week Mongolian adventure and it’s turning out to be one of the most fascinating trips of my many travels.

We’re about to have tea, a tradition that kicks off all of our daily Kazakh visits in the Altai mountains of western Mongolia.

Kazakhs consider hospitality a sacred duty, a symbol of respect and admiration. It’s an intrinsic part of their culture and fuels their close-knit community even though they may live hundreds of miles away from each other.

Their commitment to congeniality means that they hate to say no, and I quickly learn that I have to be careful what I ask for so I don’t put anyone on the spot—especially since my humor doesn’t always translate.

I once jokingly asked an elder and former eagle hunter if I could have an eagle. He responded through our translator—his unease palpable—that he didn’t think the airlines would allow a live eagle on board but if they said yes he would do his best to find one for me. I didn’t joke much after that.

On the table, before us is a traditional tea: Two types of hard cheese (Qurt, a white cheese, and Khizil irimshik, a red cheese), both made from a combination of goat, sheep and cow’s milk, the latter boiled longer, are broken into large chunks and placed in separate bowls. There is freshly churned butter that I could eat by the spoonful, a bowl of mild sour cream, a plate of store-bought cookies (bought perhaps on a trip to Ulgii the nearest city a couple hundred miles away), and bauirsak, two-inch-long, pillow-shaped pieces of fried dough.

Bauirsak is my snack of choice and I have eating it down to a science. I break the crust vertically with my thumb, fill the crevice with butter and eat the whole thing in two bites. If I am feeling particularly badass, I add sour cream on top with a sprinkle of grated red cheese sweetened with sugar.

Kneeling down next to the table, our hostess pours Suutei tsai (strained black tea with milk and water) into pretty floral china bowls and hands one to each of us. “Raqmet,” we say in return. Thank you. She smiles and nods her head towards the food on the table. I grab a baurisak and take a healthy swig of my tea as she watches.

We’re offered kumis, fermented mares milk  in the same bowls in which we had our tea. Kazakhs LOVE kumis. Milk straight out of a mare is 40% higher in lactose than cows milk and can act as a formidable laxative. Fermentation breaks down the lactose making it easier on the stomach. It also adds a fair amount of fizz and a few of my fellow travelers really enjoy it. I prefer to get my fizz fix from Diet Coke.

There are days when we see two or three families in a row and on every visit we begin with tea.  I confess I don’t always want to sit. Sometimes I am in a photographic groove and I don’t want to stop. Or sometimes I’m just full. Our camp chef keeps us well fed. In these moments I’m pretty sure I’m going to hell. Such a gracious and lovely custom and here I am the A.D.D. American wishing we could skip it altogether.

Occasionally, a family member opens the door of the ger and a fleeting rectangle of light reveals a dome exploding with color. Brightly colored tapestries line a lattice skeleton, while embroidered fabrics and embellishments in vivid red, orange and yellow adorn almost everything else.

Wolf pelts hang on the wall next to wedding photos and images of dead loved ones. A dombra—a teardrop-shaped string instrument with a long neck—dangles from a hook. A collection of medals—won over the years for school graduations, wrestling competitions and horse races—are carefully pinned to a piece of tasseled velvet and proudly displayed where any visitor is sure to see them. Everywhere there is something interesting to look at. Each object, a clue to a fascinating culture worlds apart from my own.

The gers we visit are always laid out the same, though each family adds their own decor and personal touches. Imagine the ger is a clock and the back opposite the door is 12 o’clock—that is where a low table is placed and where most of the time they gather with guests.

Between 12 pm and 3 pm: one or two wrought iron beds are positioned parallel to the wall.

At 4 pm: a curtain hangs, behind it there’s food hidden from view.

At 5 pm: large urns and stainless still pots, a butter churn or a contraption that looks like a hammock for straining cheese often stands.

7 Pm: more daily supplies and at 8 pm – 12 pm are more beds depending on the size of the family. Tucked between the major items I see clothes and pillows, saddles and personal items. (In one ger, a more wealthy Kazakh family has satellite TV.)

In the center of it all, there’s a wood burning stove.

Kazakhs originally immigrated to Mongolia from Kazakhstan in the 1800s, and are one of the few authentic nomadic cultures still in existence. Four times a year they move their families and livestock (horses, goats, and sheep) following milder climates with fields for grazing. A ger is only used in the summer. The rest of the year they live in one-room homes made of wood, mud, and dung.

There’s no running water (they set up shop near to a lake, river or large stream), no bathrooms (just crouch behind a well-placed rock) and no refrigeration. The only heat comes from the stove. They slaughter their own livestock and make nearly everything they eat from scratch. Their diet is predominantly meat and dairy products.

The more I spend time with the Kazakhs the more the Little House books I read as a child spring to mind. The simplicity of those characters’ lives, though difficult and requiring a great deal of hard work, are alive and well in the Altai mountains just as it had been in the United States in the 1800’s. I felt transported back in time to the prairie of yesteryear, albeit a Kazakh version.

After tea, and sometimes during tea—though never without asking first— we’re able to photograph our hosts as they move about their gers working on this or that, or in some cases they are kind enough to sit for portraits.

The light inside a ger is beautiful. A flap at the top of the conical roof adjusts the amount of light that hits the interior, keeps out the rain and controls ventilation.  With the flap pulled back it can be very bright but I have a thing for the dramatic and I gravitate to the moodier moments when the flap is nearly closed and light falls into the space in soft shafts.

It’s time for milking or some other chore says our translator and I see that our hostess looks worried. I can tell she doesn’t want to be rude but feels pressure to move on with her day. We immediately thank her and she smiles, the red patches on her wind-worn cheeks bunching up into a radiant smile.

She would stay serving us for hours if we asked. A gracious and kind host to say the least but we take pity on her and say goodbye, letting the ger door close silently behind us.

For regular updates sign up for The Insatiable Traveler’s newsletter

148 thoughts on “Kazakh Nomads and the Importance of Tea”

I would love to hear from you! What did you think of the post? Cancel reply

Hi, I'm Susan. Thanks for stopping by.. I'm so glad you're here!