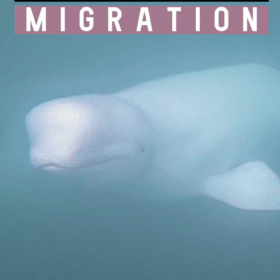 Astonished, I am overcome with excitement. Following me are nearly a dozen snow-white beluga whales close enough to touch.

As a rule, boats must stay at least 50 meters from cetaceans, but evidently, the belugas have no such regulations about humans, and I couldn’t be happier.

When we set out, Lazy Bear Expeditions guide Jason Ransom told us these highly social whales “Respond to singing.” I knew better than to subject anyone to my talentless crooning if I wanted to keep my friends, so I gave whistling ago.

And here they are.

To be fair, they are highly inquisitive creatures, famous for swimming close to zodiacs, kayaks, and the like, and they have been doing so repeatedly during our three-hour excursion.

But what they’re doing now is different.

From mid-June through mid-August, over 60,000 Arctic belugas travel south to dine on fish released by the spring thaw, mate, and calve in the warm waters of the Churchill River estuary off Hudson Bay.

To commune with them up close, I’m wearing a dry suit, lying on a spongy Tweety-bird–yellow raft while being towed by a zodiac. My friends add a full-faced mask to the ensemble, but with my narrow face, it leaks. (While a little disappointing, I still see a lot.)

If you’re enjoying this article you may also like

Winnipeg: Great Things to Do in One of Canada’s Most Underrated Cities

17 Awesome Things To Do In Churchill Manitoba

The Thrill of Canada’s only Walking Polar Bear Safari

Lazy Bear calls this unusual setup AquaGliding––a response to Canada’s recent ban on snorkeling with whales––and is the only company to offer it.

The whales hover behind the raft giving me plenty of time to get a good look. I decide with their bulbous foreheads, stubby pectoral fins, and incongruously delicate flukes they have a decidedly ugly-cute appeal.

Until now, the belugas have executed what I like to call the Churchill River Drive-by. They see us, they’re curious, they swing by, say hello, and they’re on their way.

But this pod of lovelies is dawdling. They’ve matched their speed to the boats’, moving with me, not past me. My Dr. Doolittle fantasies chalk it up to my expert whistling.

This moment has me floored. It’s a powerful thing to feel a connection with another species, no matter how slight or brief. I’m giddy with the prospect, reminding me of the morning I swam with sea lions in the Sea of Cortez.

A flurry of vocalizations rises out of the river. Belugas are known as the ‘canaries of the sea,’ but the endearment doesn’t do them justice. Accompanying their bird song are a range of sounds from clicks, whistles, and shrieks to calls resembling monkeys bellowing, rusty hinges, and the odd submarine.

Minutes pass and my new finned friends eventually move on, disappearing into the murk. They leave me euphoric.

We see the belugas again on a coastal tour. This time dressed in cozy survival suits, we hop aboard the Sam Hearne, a passenger boat named after the British explorer and Chief Factor of the 18th century Prince of Wales Fort nearby.

Built by the Hudson Bay Company, the fort was partially destroyed by the French in 1782. Today, it’s in the midst of restoration and a popular local attraction I’ll explore later in the trip.

For our voyage, we sail northwest to see what wildlife we can find. As before, the belugas appear on cue not long into our journey. Cloudy and raining, the pale whales are luminous against the dark waves.

A Peek at Polar Bears

At Eskimo Point, the northernmost tip of the seven-mile inlet, we see a mama polar bear sitting upright on the rocks nursing her cub. They’re far away, and we’re battling five-foot swells, but I manage to click off a few decent photos before it’s time to head back.

Churchill, despite its considerable population of belugas, is best known as the “Polar Bear Capital of the World,” In bear season (October and November), it’s not unheard of for residents to find an apex predator on their porch or strolling down the street.

Having spent the spring and summer inland, the bears migrate toward Hudson Bay in late fall. “Freshwater from the river freezes at a higher temperature than saltwater,” our captain and Lazy Bear owner Wally Daudrich explains. Combined with northern ice flows carried south by counterclockwise currents, the region is a nexus for first ice. For hungry bears eager to hunt seals, it’s an important factor.

For our final foray into whale territory, we jump in citrus-colored kayaks and paddle away. I heard guests at the Lazy Bear Lodge where we’re staying, say their kayaks had been surrounded by belugas the day prior. We are hopeful, but alas, we’re not as lucky.

While I always love kayaking, the outing can’t compare to the extraordinary afternoon AquaGliding.

But then again, few things could.

I was a guest of Lazy Bear Expeditions. Words and sentiment are my own

How You Can Frolic With Churchill’s Amazing Beluga Whales

How to Get to Churchill

To get to Churchill you need to fly into Winnipeg (It’s a great city you might want to spend some time there too), spend the night and then fly to Churchill the following morning. There are no roads to Churchill but there is a train, but I don’t recommend it. The trip is VERY long.

Lazy Bear Expeditions has been a Churchill mainstay for over 30 years. It’s a travelers’ one-stop-shop. In addition to being an outfitter, the company has an adorable lodge and the town’s most popular cafe — both under the Lazy Bear moniker.

The company offers seasonal packages which include roundtrip flights from Winnipeg to Churchill, accommodations, a range of cultural and wildlife excursions including the coastal tour, and some meals. I was on the “Ultimate Arctic Summer Adventure.”

Aquagliding ($225/pp) and Kayaking ($175/pp) are additional. To guarantee availability, it’s best to add these activities when you book your trip. Both are 3-hours long and everything you need is provided. (Children must be 12 and above to participate.)

Bring a dry bag to carry any nonwaterproof items you want to bring along on a river excursion such as phones or cameras.

Bring WATERPROOF raingear. There’s a good chance you’ll use it. No water-repellent fabric will hold up.

Renting or buying a GoPro is worth the investment for the shots you’ll capture with the belugas. Jason taught me a great trick. Have your camera set to Super Wide then turn the camera upside down until the view in the LCD also rotates, then press play. That way you can stick it deeper in the water instead of having to hold it level. Bring a long stick and make sure it’s looped to your hand. The current is strong; you don’t want to lose it. (Note: This is only when Aquagliding. The coastal tour boat is too high for you to reach the water.)

Try the cafe’s Lazy Burger, it’s delish. So are the “Miss Piggy” ( a pulled pork delight) and Sam Hearne (roasted chicken breast sandwich, with bacon and cheddar), the homemade pies and onion rings. I don’t drink coffee but my friends were over the moon about the Espresso milkshakes.

For regular updates sign up for The Insatiable Traveler’s newsletter

I would love to hear from you! What did you think of the post? Cancel reply

Hi, I'm Susan. Thanks for stopping by.. I'm so glad you're here!